Did you know IE is discontinued? We appreciate technology from the past too (microform, anyone?), but this site utilizes modern browser features not found in IE, so we recommend it be viewed in Chrome, Firefox or Edge.

University Libraries are suspending in-person services until further notice. We are moving to a completely virtual operation, and we will continue to serve the UAlbany community with research assistance, electronic resources, and more. For more, please visit COVID-19 Changes

During the Summer of 2009, in the weeks leading up to Dewey Library’s 100th Birthday Celebration, the Dewey Library blog ran a series of posts and photographs tracing the history of the Hawley Building and the creation of Dewey Library. The blog answered some of the questions we often hear: Why is the building called Hawley Hall when it houses Dewey Library? What is the story of the beautiful murals and stained glass windows in the building? What did this building used to be, before it was a library? Here are the answers to these questions and more. 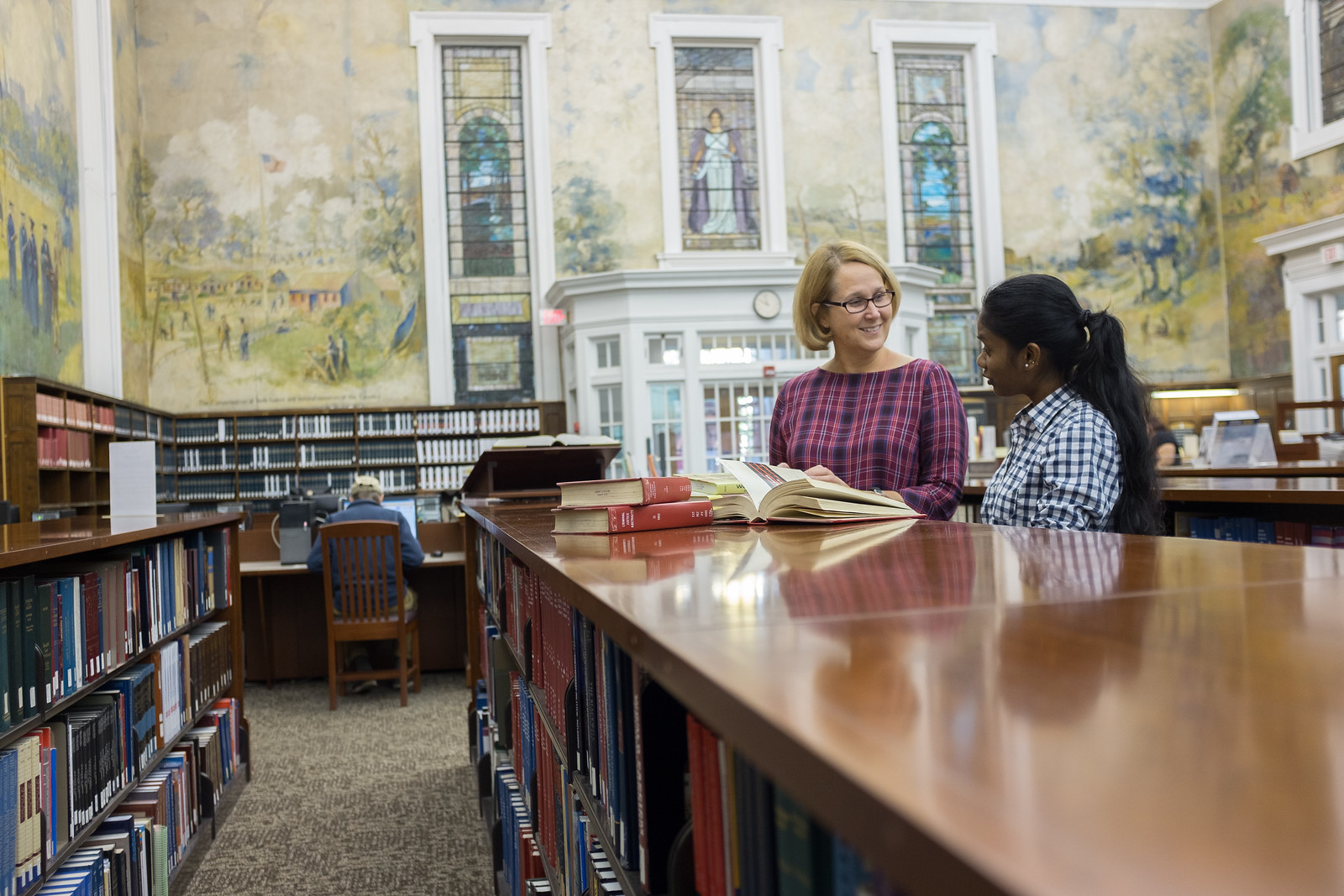 Hawley Hall was dedicated in September 1909. It was first created as an auditorium, and was used for that purpose until Page Hall was opened in 1929. Weekly assemblies were held in the auditorium for all students to attend. The basement of Hawley Hall, where our circulating books, quiet study, and information commons are now located, was a gymnasium. The library was located in the Administration Building (later named Draper Hall). It was a sparse collection, and the room only seated 60 people.

According to Geoffrey Williams, the University at Albany Archivist, a college faculty member was a frequent luncheon guest at the Executive Mansion when Franklin Delano Roosevelt was governor. This faculty member would help Franklin and Eleanor practice their French. At some point the faculty member mentioned to the Roosevelts that the college needed a new library. Possibly as a result of these discussions, a request for funding to expand the library from Abram Brubacher, college president, was approved, and in 1933, Hawley library was opened. The upstairs was essentially a large study hall with books lining the walls. The downstairs gymnasium had become the Student Commons, where dances were held. The mezzanine, where the Dewey Classroom is now located, was where student groups held their meetings. The lower level became a second reading room for the library in 1951.

In 1966, the new Uptown campus was built, and the Hawley library was abandoned, although it may have been used for various purposes by the Milne School. For a period in the 1970’s Hawley Library was a public affairs library. The library materials for the newly created School of Social Welfare and School of Criminal Justice were located up the road at Alumni Quad. In 1979 the Social Welfare and Criminal Justice programs were moved to the downtown campus. Later Library Science, and in 1982, Public Affairs and Policy followed. These programs were organized into the Rockefeller College of Public Affairs and Policy, and the library was reinstituted in the Hawley building as the Graduate Library for Public Affairs and Policy. The library was to meet the needs of the downtown campus programs and research centers.

In September 1988, the library was named after Governor Thomas E. Dewey. Warren Ilchman who was Provost of the Rockefeller College at that time and the founder of Rockefeller College wanted to rename all of the buildings on the downtown campus for notable New York State politicians. However, this initiative was never realized and only the Library was renamed. This is why the “Dewey Library” is located in “Hawley Hall". Although the official name of the library remains the Thomas E. Dewey Graduate Library for Public Affairs and Policy, it has more commonly been called the Dewey Graduate Library since 2001.

Today Dewey Library boasts a collection of over 135,000 items, including books, journal subscriptions, microfilm, videos and software. Users also have access to thousands of electronic journals and databases. In 2008, the Information Commons was expanded to provide computer workstations on both the first floor and in the basement. Downstairs areas include Quiet Study, Group Study and a small classroom. The Dewey Graduate Library seeks to keep abreast of the ever changing needs of the downtown campus community.

The Van Ingen Murals and the Stained Glass Windows

Visitors to the Dewey Graduate Library are often struck by the expansive murals covering the walls of the Dewey Library. The murals were created by William Brantley Van Ingen. A Pennsylvania native, Van Ingen was based in New York City and painted murals for many public buildings, including the Library of Congress, the state Capitol buildings in New Jersey and Pennsylvania, and the U.S. Mint in Philadelphia. He is most well known for painting the murals in the Panama Canal Administration Building. He also worked in stained glass.

The Dewey Library murals were created in 1937 and 1938, funded by the Works Progress Administration, a “New Deal” program instituted by President Franklin Delano Roosevelt to help pull the country out of the Great Depression. The murals cover over 4,500 square feet, and depict notable moments in the history of New York State as well as the teacher’s college which later became our University.
For more detail about the history of the murals, and the scenes depicted in them, check out our page on the History of the Dewey Murals, including a virtual tour of the scenes depicted. (You may need to update your Adobe FlashPlayer to see the tour.)

The ten Dewey stained glass windows, both intricate and inspirational, were gifts of the graduating classes of the State Normal College and the New York State College for Teachers to their Alma Mater. The first stained glass window, placed prominently over the entrance, was donated by the graduating class of 1910. Hawley Hall, then an auditorium, was the site for compulsory Friday assemblies and the Moving-Up Day ceremonies during which the windows were presented to the college. This ceremony celebrated the imminent graduation of the Senior class and the rise of the Junior class to Senior class standing. Unfortunately, little documentation of their creation or presentation exists. The windows are thought to have been made in Albany by Chapman Glass Company, which is still in business to this day. The latest cleaning and repairing of the windows was done in the 1980’s. At the time storm windows were added to protect them.

For images of the stained glass windows, check out our flickr page Stained Glass Windows.

**The murals and windows have required cleaning and maintenance over the years and contributions for this purpose are most appreciated.**  See http://library.albany.edu/about/giving/